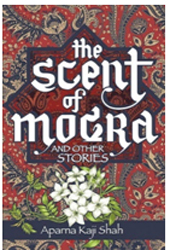 Stories with focus on gender based issues faced by Indian women

The Scent of Mogra and Other Stories is a debut collection of short fiction by Toronto-based Aparna Kaji Shah. The blurb informs us that Kaji Shah was born in Mombasa, lived in Mumbai and then relocated to Canada. We might therefore assume that the stories in this collection deal with the themes of dislocation, nostalgia and cross-cultural conflicts usually associated with writing of the diaspora. The five short stories in The Scent of Mogra, however, focus on gender based issues faced by Indian women across space and time. A recurring denominator is the perception of marriage as a shackle that inhibits and oppresses. Shah’s focus is on the mechanisms of a patriarchal society and its multiple levels of suppression. Her female protagonists are articulate about their dilemma, yet they are unable to exert full agency to empower themselves.

In the opening story, Maya is a well-qualified fifty year old woman who seeks a meaningful relationship with a younger man. She has remained unmarried, having had to care for her mother for her entire life. After her mother’s death, she experiences ‘a deep bottomless vacuum’. The story sensitises us to the emotional and physical needs of women in their mid-life. We applaud Maya’s decision to join the Canadian doctor Mark on a trip to Rajasthan as a bold first step towards a relationship that goes beyond conventional commitment.

“The Last Letter” is the longest story in the collection, and perhaps the most moving. The story is structured as a series of letters from Surekha, who now lives in Mumbai, to her brother, parents and best friends Kamala and Minu back home at Nagda. Her initial letters capture her excitement of being a new bride in the dream city of Mumbai, but she moves on to describe the intense loneliness of a friendless woman who is caught in a loveless arranged marriage. Living in a cramped apartment, her view of the outside world is limited to what she can see from her tiny kitchen window. She is aware of the possibilities of art and culture in the city but cannot experience any of the exciting events because of the domestic demands of her husband. Surekha suspects her alcoholic, abusive husband is having an affair and yet she cannot disclose the truth of her situation to her parents. She considers herself to be a failure the story ends on a tragic note, despite Surekha putting up a brave front and making every attempt to be a good wife to an abusive husband.

“Ba” is the only story in the collection which is narrated by a male protagonist, and set in Canada. University student Suneel describes his bonding with his seventy-five year old grandmother. He remembers her outgoing nature and enthusiasm to reach out to others, until his grandfather’s death. Thereafter Ba self-imposes restrictions of widowhood – ‘white sari, no bindi and a single gold bangle.’ She is diagnosed with lung cancer and on her death, and Suneel pays tribute to the inner strength he has derived from his grandmother’s moral fibre.

Also included in the collection are stories that draw from the mother-daughter bonding. In “Vidya” a young mother is on her death-bed. In her final moments, she re-lives the trauma of being molested by her father-in-law. Her greatest fear is that her three daughters may suffer the same fate. In her comatose state, she is unable to convey her anguish to her family members. The title story “Scent of Mogra” introduces the theme of incarnation while once again focuses on the theme of gender oppression over generations. Sushmita, who is now dead, speaks of the story of her daughter Tina and connects Tina’s life narrative to the tale of Princess Megha, a previous incarnation. In “No other way,” Mira is a young bride married at the age of fifteen to Raj who is an alcoholic and abusive. She plans an escape with ‘the Dom,’ a group of people akin to nomads.

Given the fact that Shah is based in Canada, she understandably directs her writing towards a non-Indian readership. The danger in doing so is the tendency to replicate stereotypes such as descriptions of India as a land associated with beliefs of reincarnation, Maharajas and a feudal setup. The cultural milieu of stories such as ‘Scent of Mogra’ and ‘No other way’ veers towards generalisations rather than specific signposts of time and geo-cultural location. Aparna Kaji Shah is a first time writer, and this is reflected in the simplicity of style and straightforward plots. The reader remains engrossed, though, due to the engaging storylines and the author’s ability to create empathy for her women characters.